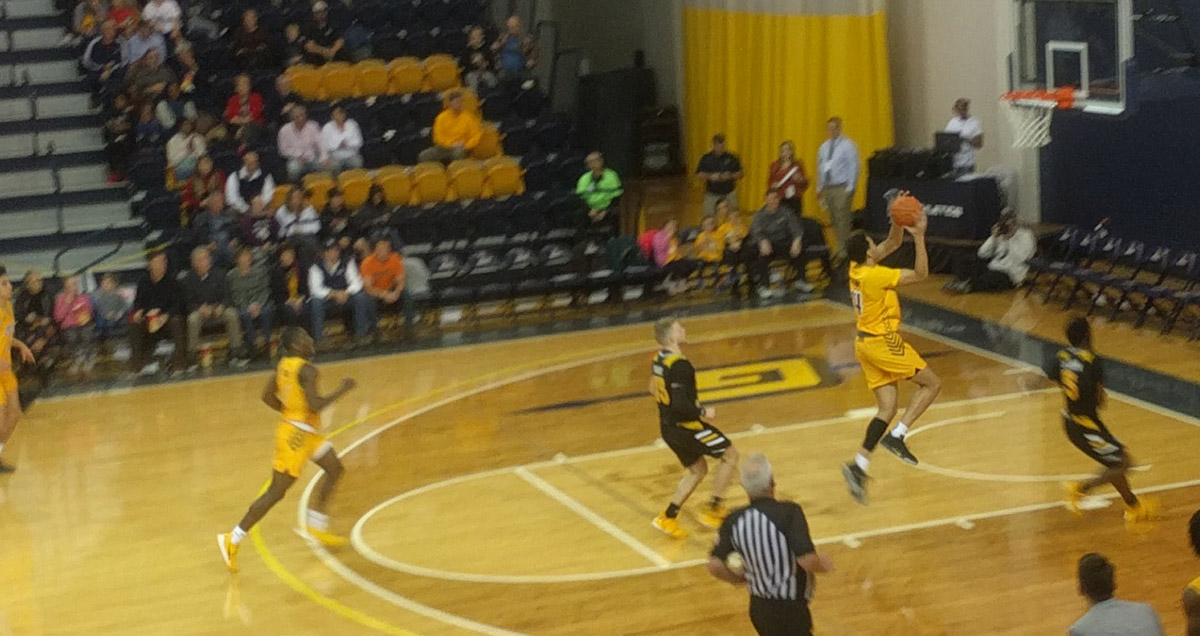 With Northern Kentucky missing their leading scorer, Dantez Walton, the Norse relied on their 2nd leading scorer, Tyler Sharpe, to score 33 of their 50 points. They had trouble with our defense (a normal thing to say this year) and no other Norse player posted double figures in scoring.

On the other hand, UNCG spread out their scoring with 8 different players adding 6 or more points. It was a good win against an opponent that should have given us more trouble than they did.

And for a game over the Christmas break, the official attendance as 648, although it felt like a LOT more than that … at least 1500. The place got loud and rocked. It wasn’t a normal Christmas break atmosphere.

In 10 minutes of play, Hueitt went 3-3 from beyond the arc with 1 rebound. Excellent game!

Mo has definitely upped his game this year, going 3-5 from the floor during our “lull.” Add 4 boards and 1 assist and for 20 minutes of play, that’s pretty productive.

Kaleb still a little shy on the court (and who isn’t after getting injured?) … and it showed with his missed, unguarded dunk opportunity set up by Isaiah on a fast break. Kaleb would normally hit his head on the rim at times like that, but this time failed to get any height for his dunk. His numbers were still okay — 3-7 from the field (0-2 3PT), 1-1 FT, 4 rebounds. But the 4 turnovers were not good.

Isaiah had a rare “off” game, exacerbated by the lower back injury he sustained early on when he crashed to the floor after getting blocked on a drive to the basket. He may not have been making his shots, but he helped out in other ways. 3-12 FG (1-4 3PT), 7 rebounds, 6 assists, 3 turnovers.

Finally got his first collegiate score! 1-2 FG with 1 assist & 1 turnover.

Missed the one shot he took and pulled down 1 rebound.

No stats in 1 minute of PT.

This game was never close. It was obvious from the beginning that Northern Kentucky couldn’t handle our press. Nevertheless, it was a fun game to try some new things out. Kaleb needed it to help ease him back into the lineup. Isaiah & Malik needed to get their “bad” games out against an opponent that was already under control.

Next up is William Peace, a gimme game against a Division 3 opponent out of Raleigh.